They visited every day
For the grass, starry flowers
And space to play for hours.
In spring, peach trees burst into blossom
And the happy children feasted on fruit all autumn.
After a seven year visit with a Cornish ogre,
Summer saw the return of the owner,
A selfish giant who scared them away
With his gruff voice and a sign that said:
‘Trespassers will be prosecuted’.

He built around his garden a lofty wall
And the children had nowhere to play at all.
Without their happy voices the garden went to sleep.
In spring, when birds were nesting and flowers began to creep,
It was winter in the selfish giant’s garden,
Where the shivering peach trees forgot to blossom,
The lawn was covered in a blanket of snow
And all year round the North Wind blew.
The selfish giant couldn’t understand
Why the winter weather remained.

One morning as he lay in bed,
The giant heard a sound so sweet
That he rose to look out onto the street:
It was the musical tones of a linnet.
The hail had stopped rattling above his head,
The North Wind had dropped as if it were dead
And through the open window, a sweet scent drifted:
Children had crept through a hole in the wall
And climbed into the branches of every tree
That blossomed with white flowers.

But in one small corner, winter prevailed
Where a small child couldn’t reach
The lowest branch and cried most bitterly.
The tree was covered with frost and snow;
In its boughs, the North Wind continued to blow.
The giant’s heart broke to see the tree bend its limbs
And encourage the young boy to climb.
The giant crept into the garden,  the children were afraid
And winter returned to the giant’s estate –
But there was one little child who stayed.

Blinded by tears in his eyes, he couldn’t see the ogre,
Who lifted him onto a branch that suddenly burst into flower
And filled with a myriad of singing birds.
The little boy, who was lost for words,
Reached out and delighted him with an embrace,
A smile lit up the giant’s face
To welcome the children to the garden
And with them the spring.
The giant took an axe, knocked down the wall
And played with the children until nightfall.

But when the time came to say goodbye,
The giant noticed, with a tear in his eye,
That the little boy he loved the best wasn’t with them:
They didn’t know where he came from or even his name.
The giant was distraught at the thought
He would never see the child again.
Eventually he grew old and could no longer play,
He sat in his armchair and watched the children all day,
Saying, ‘I have trees and flowers so beautiful
But the children are the loveliest of all.

One winter morning, as he looked out at the snow,
He saw in a corner a tree made of gold
That was covered with blossom and laden with fruit,
And his beloved child standing below.
The joyful giant ran down the stairs
And into the garden he raced
Across snow-covered grass to where the child stood –
And stopped sharp, with an angry face:
On the child’s palms were the marks of two nails
And the same could be seen on his feet.

‘Who dared to hurt you?’ the giant cried.
‘These are wounds of love,’ the boy replied.
The giant knelt before the child,
Full of fear and mute with awe.
‘Let me play in your garden once more,
And you shall come with me to Paradise.’
When school was over that afternoon
And the children returned to play,
They found the giant under a tree,
Covered with blossom, lying peacefully. 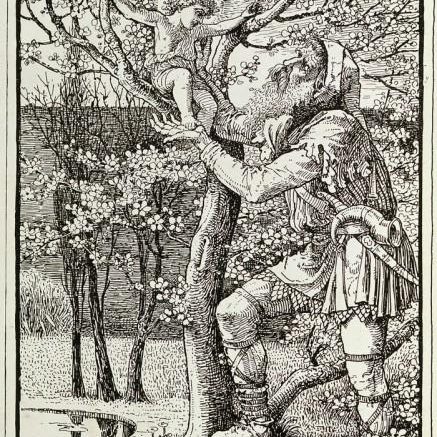 This evening I am hosting with a musical prompt that takes me back to my teenage years, when one of my personal anthems was ‘Johnny’s Garden’ from Stephen Stills’ double album Manassas, released in April 1972. Johnny’s Garden was a real place where Stills could be ‘safe from the city blues’, where ‘it’s green and it’s quiet’ at Brookfield House in Elstead, Surrey. The house was first owned by Spencer Tracy, then Peter Sellers, and later Ringo Starr.  Stills bought the 350 year old Tudor mansion in 1970. The one constant that withstood the changes in ownership was the gardener, Johnny, who looked after the estate. He was apparently a herbalist who made incredible teas. Stills said he had soul. It’s also been said that Peter Sellers based the character of Chauncey (the gardener in the Hal Ashby film Being There) on Johnny.

My garden poem was inspired by Oscar Wilde’s story, ’The Selfish Giant’.

47 thoughts on “The Selfish Giant’s Garden”