Hidden in plain sight,
trapped in the linseed scent,
the musk of old art and paint,
behind the green and ochre
of the Olive Trees
for over a century,
it forfeited the freedom
of life en plein air.
Vincent didn’t notice
his secret guest,
having picked off
“a good hundred flies and more”.
The grasshopper in the landscape
whispered of his painting outdoors
during a self-admitted stay
at the Saint-Paul asylum in May.
Without head and thorax,
it was dead before it hit the canvas. 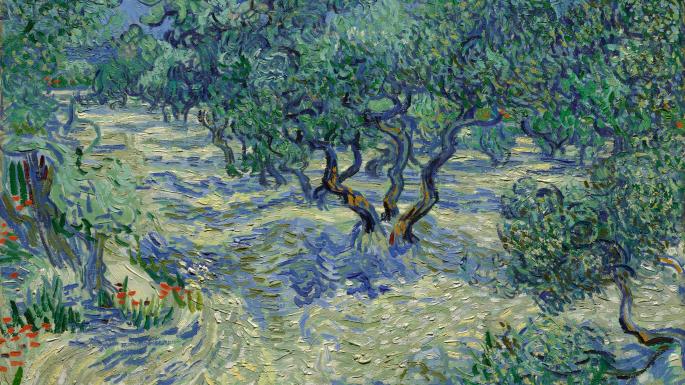 Björn, our host for this week’s Meeting the Bar, reminds us that the world is filled with stories that might or might not be fiction. He says that he finds it interesting that the oldest saved poems are actually stories, the poetry, with its rhythm and rhymes making it easier to be recalled. He tells us that the oldest saved piece of poetry is the epic of Gilgamesh, which is also the oldest literature that still exists, dating back to 2200 BC.

Today Björn would like us to tell him stories, fiction or nonfiction, new or ancient, using the following literary devices:

My narrative was inspired by an article I read about a grasshopper that was found in a van Gogh masterpiece 128 years after he painted it.

39 thoughts on “A Secret Guest”