I am linking this post to Jacqui’s Echoes of my Neighbourhood over on A Cooking Pot and Twisted Tales. I know that some of her regular visitors have been interested in where I live, particularly in the local landscape and the lighthouse, and I promised something about windmills! I also wrote the poem below to accompany some of the photographs I took this weekend of easily accessible local windmills.

There were once hundreds of working windmills across East Anglia, particularly in Norfolk. I have started to photograph as many of them as I can. Some are open to the public, while others are on private property, all in different conditions.

Stow Mill, the beautiful tower corn mill at Paston on the north east coast of Norfolk is situated in an area ‘of extreme natural beauty’, six miles south of Cromer. It has undergone considerable restoration work and is now a popular tourist spot. 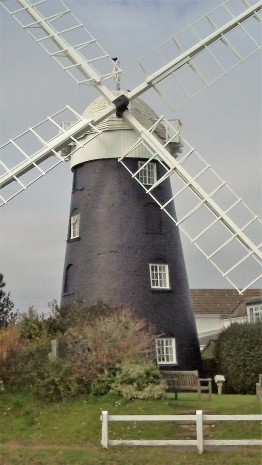 Horsey Wind Pump is an iconic Norfolk Broads landmark, which has been lovingly restored and is also open to the public. It seems to have had its sails removed, perhaps for repair. It has survived floods, a lightning strike, a collapse, storms and gale force winds. It is situated further east from Stow Mill, not far from Horsey Beach where I recently had a wonderful time taking photographs of seals.

Sutton Mill was built in 1789 with 8 floors. When it was rebuilt after a fire in  1861, an additional floor was added and the common sails were replaced by patent sails. The nine storey mill was topped by a traditional Norfolk boat shaped cap and had a gallery and petticoat. By 2005, Sutton Mill had become by far the tallest remaining windmill in the county. When I first moved to Norfolk in 1992, it was home to a traditional museum. On 26th September 2008 the mill and the museum closed for business, and on 8th September 2012 the Bygone Museum contents were advertised for sale by auction. It is now in a sorry state of repair.

The other two local windmills are sadly derelict and inaccessible. The one on the left is a late 18th century five-storey, tarred, red brick tower mill outside the sea-side village of Sea Palling, where I first lived when I moved to Norfolk. The one on the right is a 19th century red brick tower mill further down the road near Ingham. Last year I wrote a post about the pub and the church at Ingham. If you are interested, here is a link:  https://writinginnorthnorfolk.com/2015/07/26/this-morning-looks-brighter/

The End of Norfolk Giants

This flat landscape used to sing

With sighs of wind in creaking

Or pumping water from a drain.

Windmills towered amongst the trees

Windmills across Norfolk were a sight

But now, in modern times, they languish,

Until only their ruins remain,

8 thoughts on “The End of Norfolk Giants”