Stained glass in the ornate dome
is splintered by a single ray of sun,
forming ghosts in the hippodrome,
derelict music hall of burlesque fun.

Vacant seats echo with silent applause
from an audience of decay and shadows
filling gallery, balcony and stalls
littered with tickets to long forgotten shows.

The theatre still waits for the curtain to fall
on its magical escape from the wrecking ball. 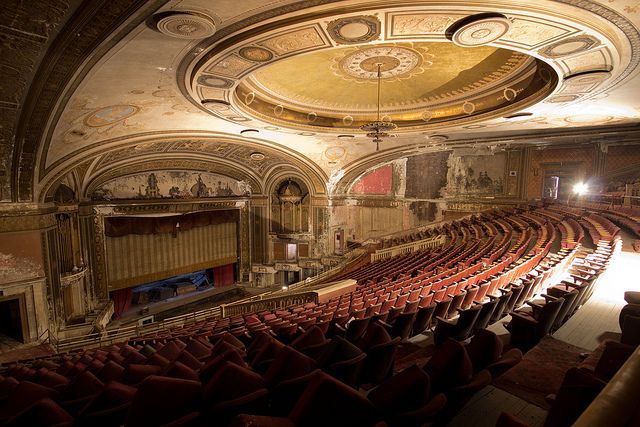 My response to dVerse Poets Pub Meeting the Bar: Setting

This Thursday Grace is hosting Meeting the Bar and highlighting the importance of setting in our writings. She reminds us that setting is the time and place where a story or scene occurs and, to make it come alive, it’s important to include significant details.

Grace explores four ways to clarify the setting without using long descriptive passages and gives examples in a contemporary poem, ‘Jack’ by Maxine Kumin, in which the speaker reflects back on a different time and place, a brutal winter that sets a mood of nostalgia and regret, and ‘Hustle’ by Jericho Brown, which repeats the word ‘prison’ to emphasise the setting.

Our challenge is to bring our readers to a time and place in our poems, using the smells, sights and sounds of our settings, which can be real or fictional, or a combination of both real and fictional elements.

I decided to rewrite a poem about an abandoned theatre, which I first posted back in 2016.

39 thoughts on “An Audience of Ghosts”