In the glaucous state of becoming,
she recalled the words
she was singing
in her dream:
‘Willow weep for me’.
Her hair was delicate branches,
her thoughts rain-scented leaves.
She had been warned not to cry beneath a willow.
Now it clasped her in an everlasting embrace
and the grooves in its trunk traced the lines of her face. 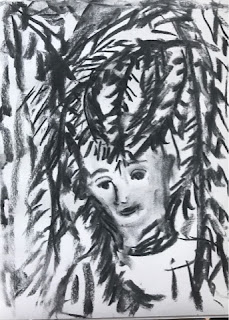 This weekend Karin says that “Tell me a story” may have been how the literary arts began, that telling stories was the job of much early poetry, whose “poetical” aspects served, in part, as mnemonic devices, so that the poet would either not forget what came next, or could fill in time until he remembered it.

She says an underlying story or even a hint of story can keep a reader engaged in a poem in ways that even beautiful language may not, which is especially true in longer pieces. Narrative can appear in many different ways in a poem–sometimes so slyly that one can’t exactly find the story, but glimpse the mere silhouette of a story, sometimes even just a curve of a silhouette.

Karin has also shared some of her drawings that could be used in conjunction with our poems, and has tried to pick pieces that have story-like elements.

33 thoughts on “The Shadiness of Willows”